The Nailsea lawns are well maintained and provide a good surface for accurate shots. At the end of the 2017 season, we had major levelling work done to make the conditions even better. The weather in the winter was particularly cruel with the rain causing the lawns to flood just after the seeding had taken place. This caused major delays but the lawns re-opened in June 2018. The surface was still work in progress but we were playing again!  The lawns have now matured a bit and had some over-seeding in August 2020. This improved the sward for 2021 and more work will be done over the coming winter. The Club has a reputation for excellence in competitive croquet and also for the friendliness to be found there. If you like ball games or mind games, croquet might be just what you have been looking for. You don’t need to be fleet of foot but you do need to have good co-ordination and to enjoy strategic thinking. In 2021, 27 new recruits enjoyed lessons for beginners and 18 of them went on to join the club. 12 then took part in the beginners competitions at the end of the season, 6 in Association Croquet and 6 in Golf Croquet

Look at https://www.youtube.com/watch?v=mCW_Rb5Y7t4 to see the croquet world in action.

The photographs below show members and visitors enjoying this wonderful sport. 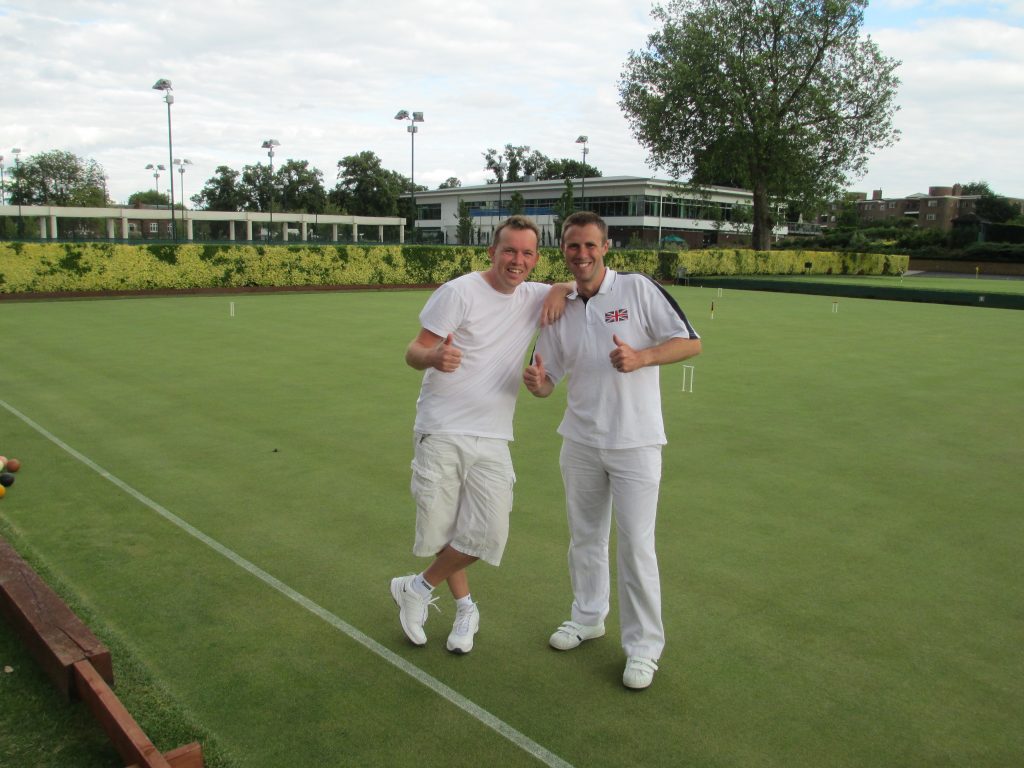 Kriss and Marcus celebrate getting through the qualifying stages of the World Championship. Both learned to play croquet at Nailsea as children 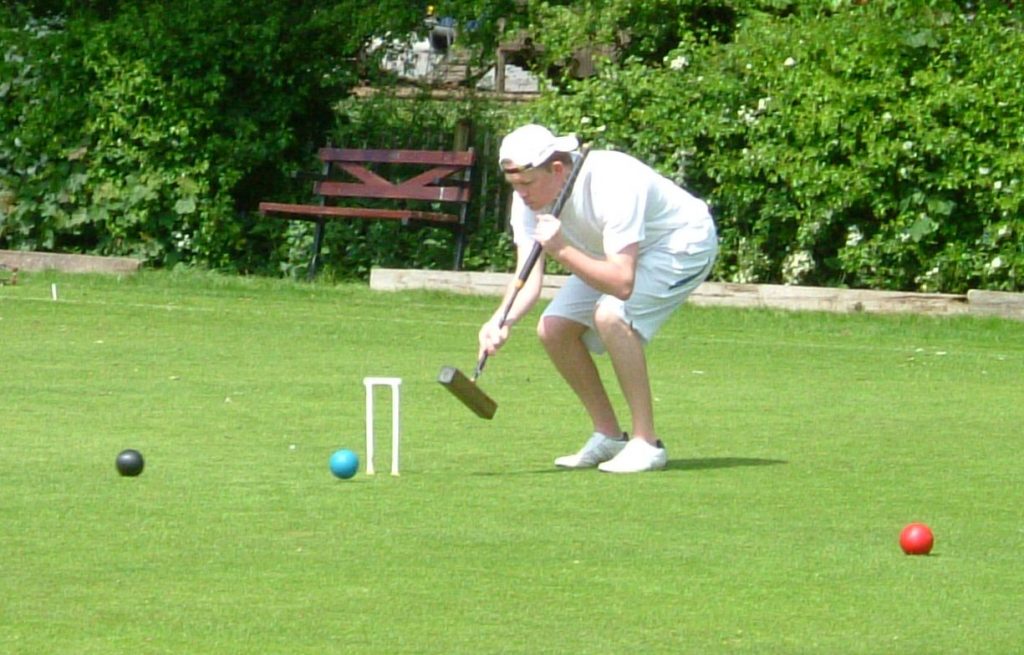 Kriss in action at a tournament at Nailsea 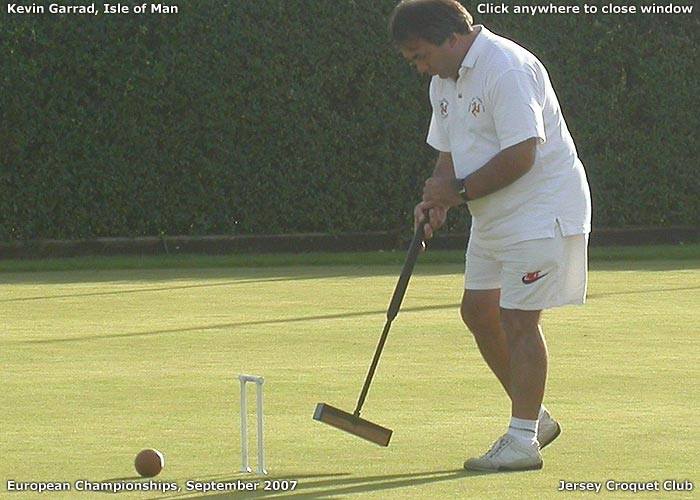 Kevin is another player who learned to play at Nailsea – in 1992. He has played in five World Championships all over the world 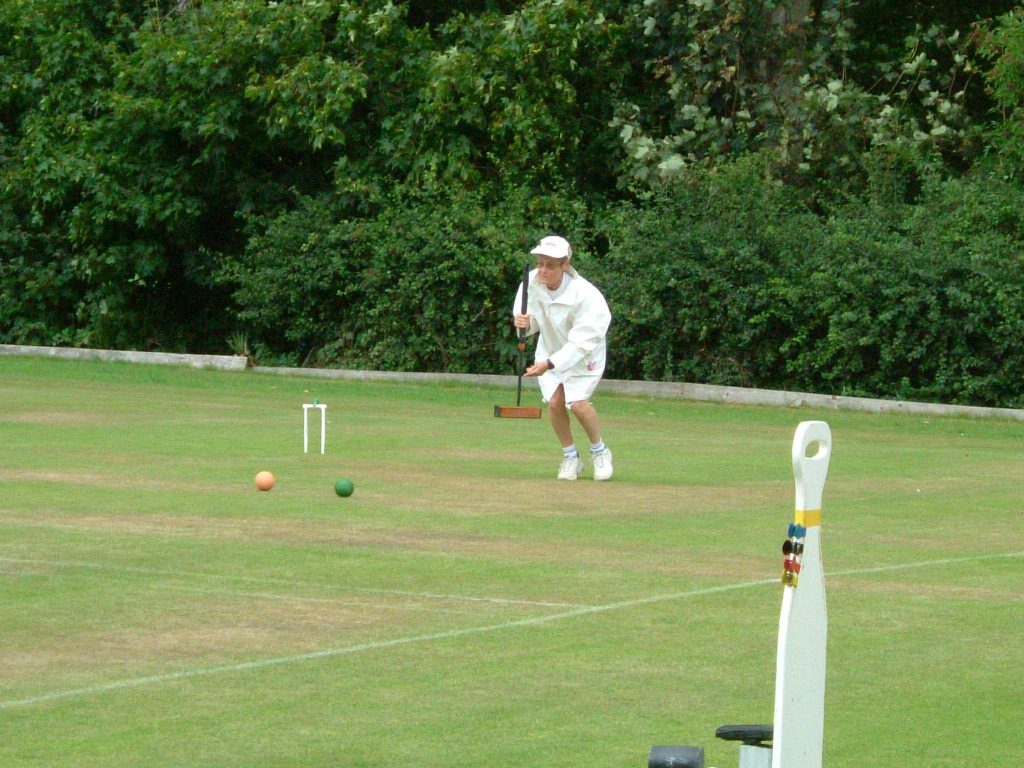 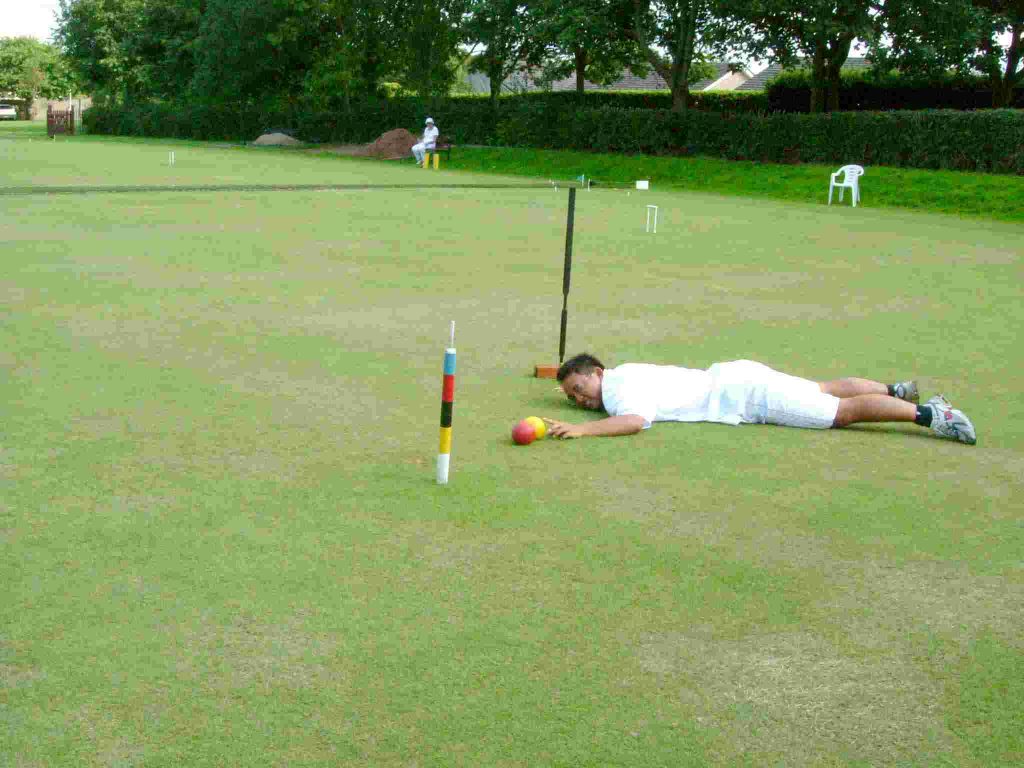 Eugene lines up a “pegout”; this is usually the last stage of winning a game of Association Croquet 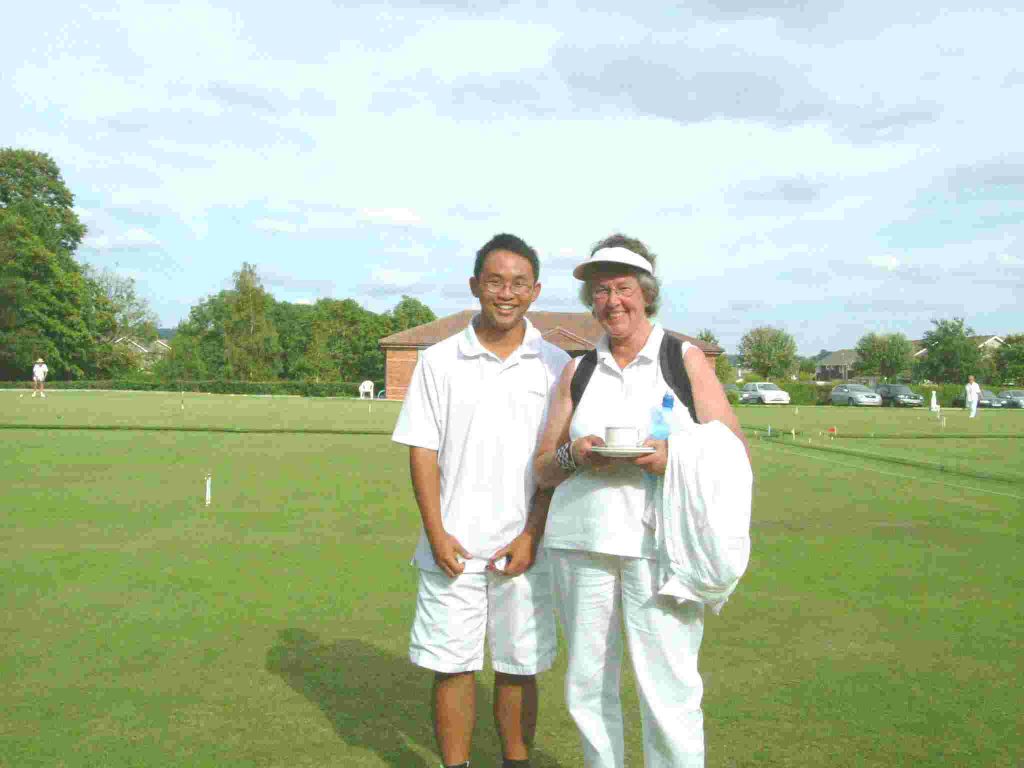 Having won the game and the tournament, Eugene poses with Greta, the runner-up. Eugene was aged 16 and relatively new to croquet. As this was a Handicap Tournament he was able to use his extra shot allowance to win against a more skilful and experienced player. Eugene went on to compete at high level himself and has introduced croquet to the students at Sheffield University where he is now a researcher in the Computer Science Department. 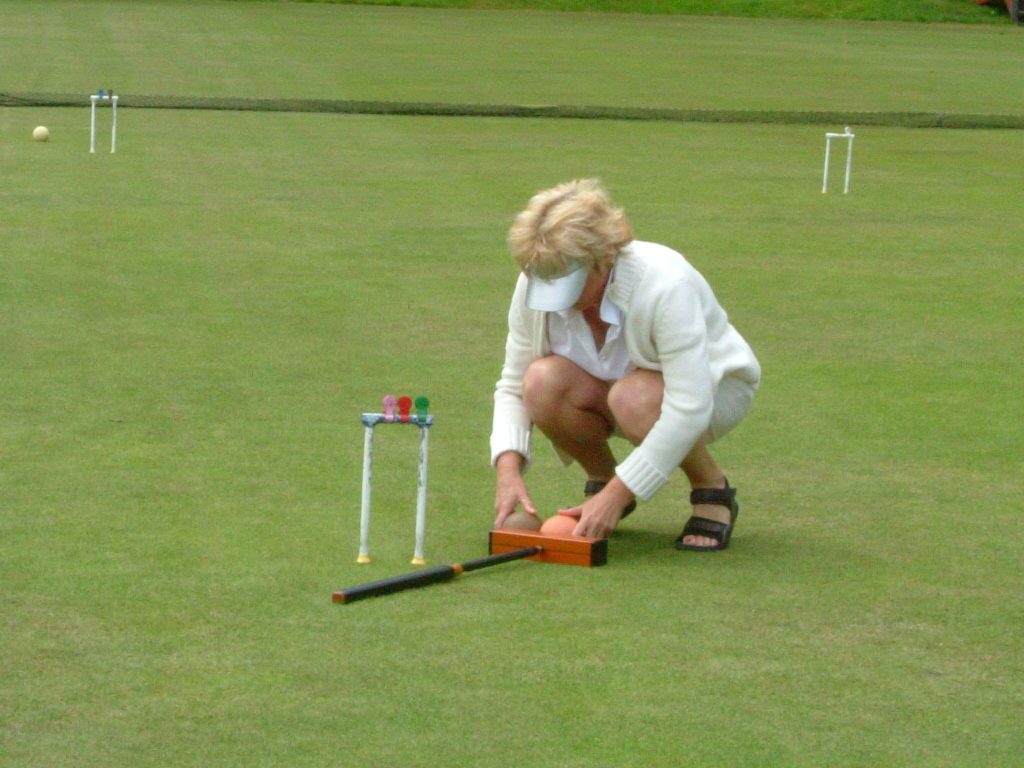 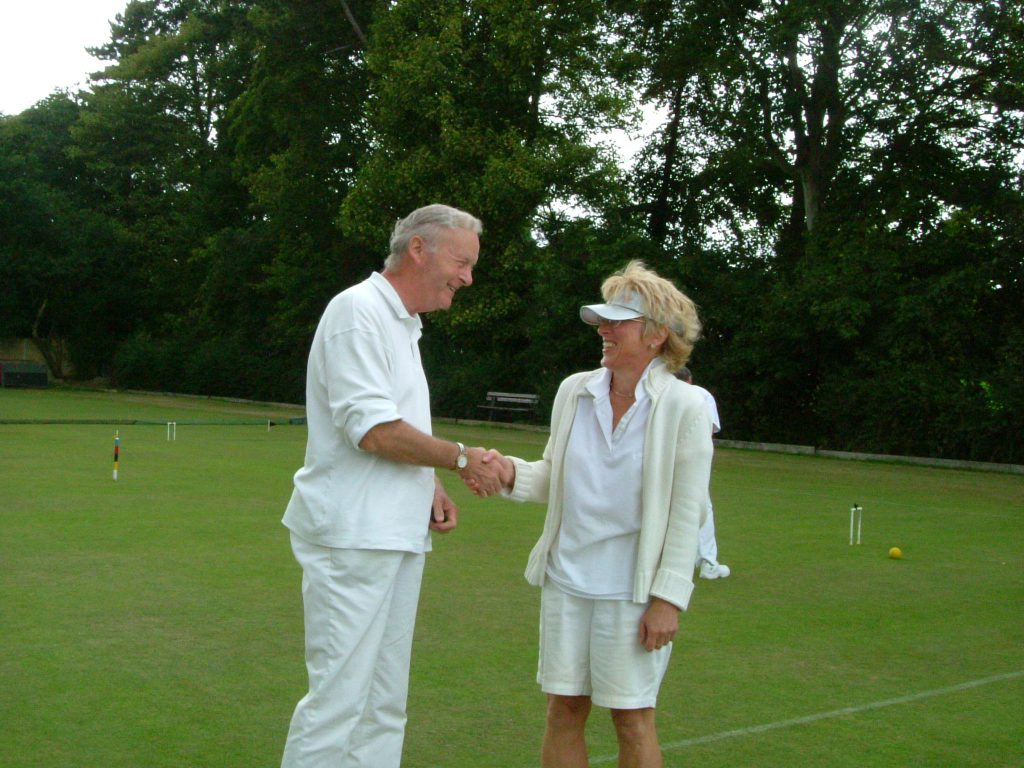 Linda won the game and the High Bisquers Competition. She shakes hands with her opponent, Jim, a gracious loser! 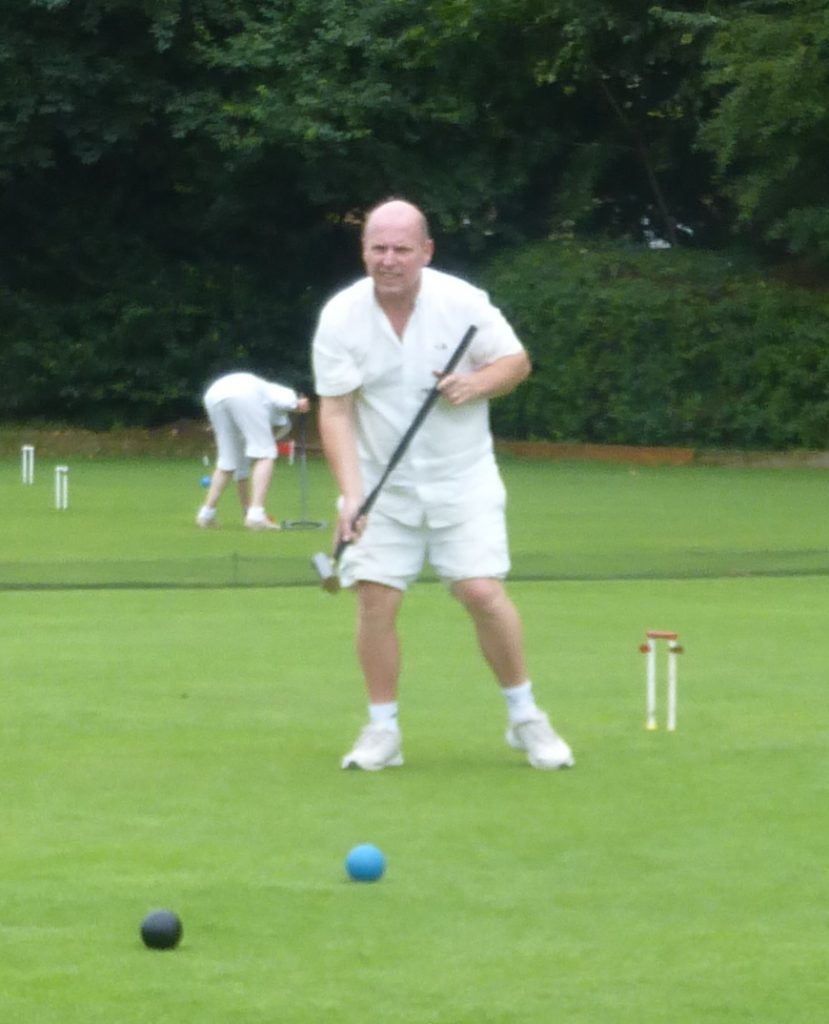 Peter, a visitor from Dyffryn Croquet Club, playing in a Nailsea Tournament 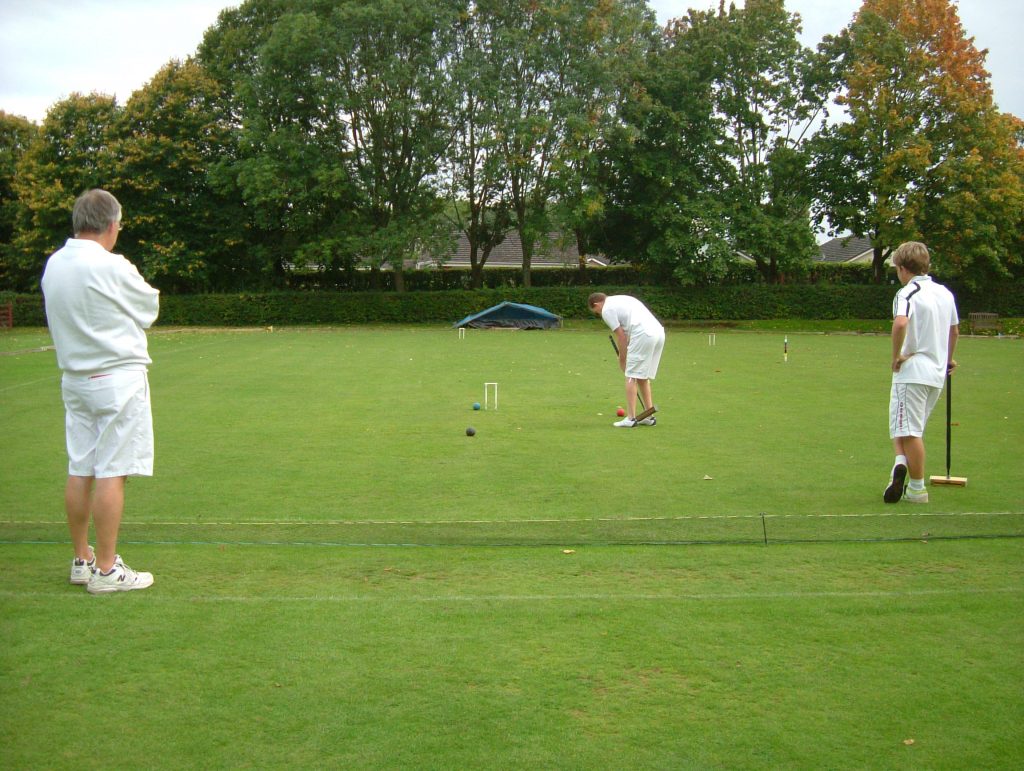 Peter Dyke watches Kriss and Ryan, two of the many juniors that he has coached to a high standard 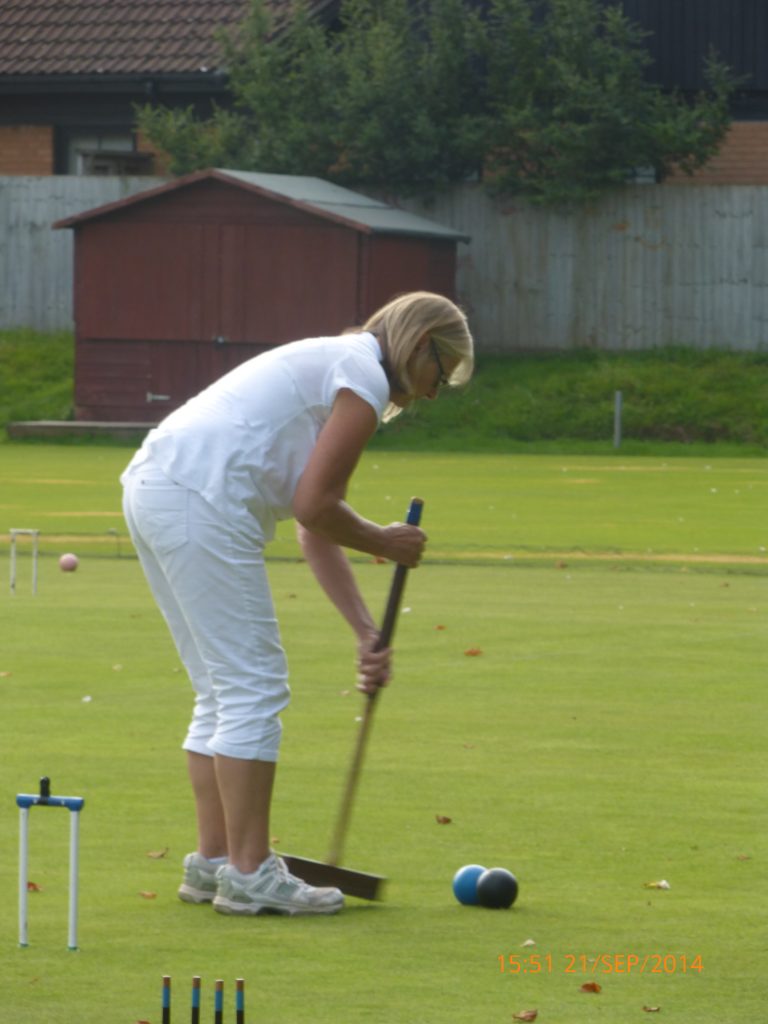 Jo takes part in the Beginners’ Competition at the end of her first season. The sticks keep track of her extra shot allowance – she must use them wisely. 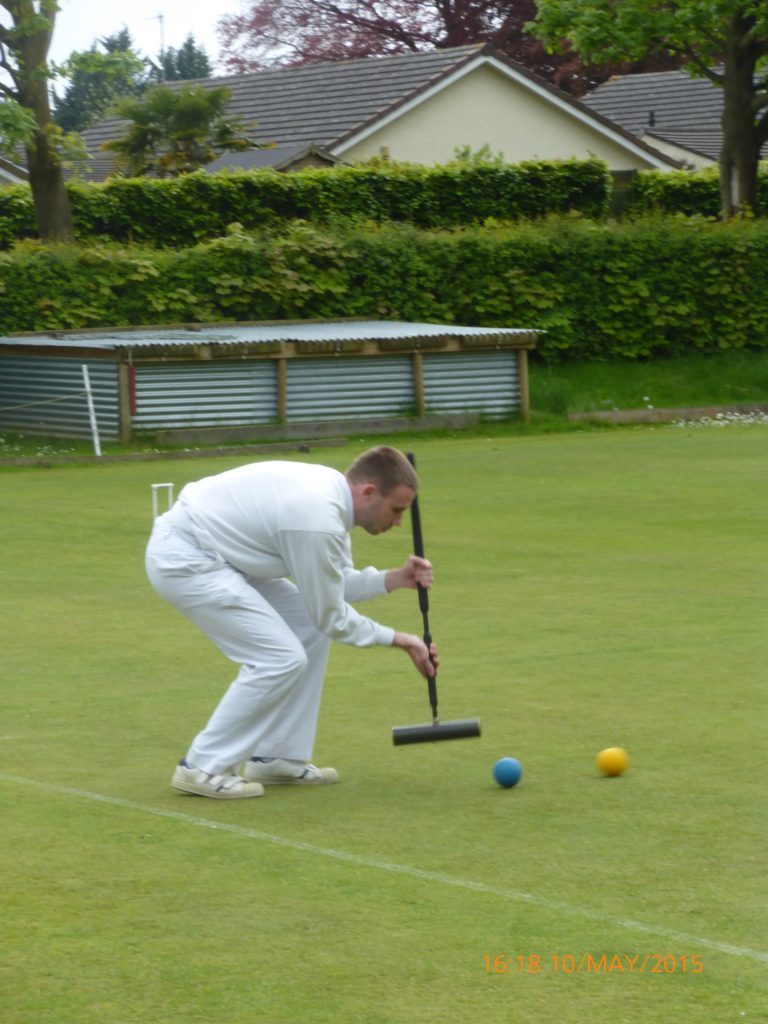 Marcus in action at Nailsea. where he learned to play as a 13 year old. Marcus has played in World Championships all over the world, his greatest feat being a semi-final appearance. 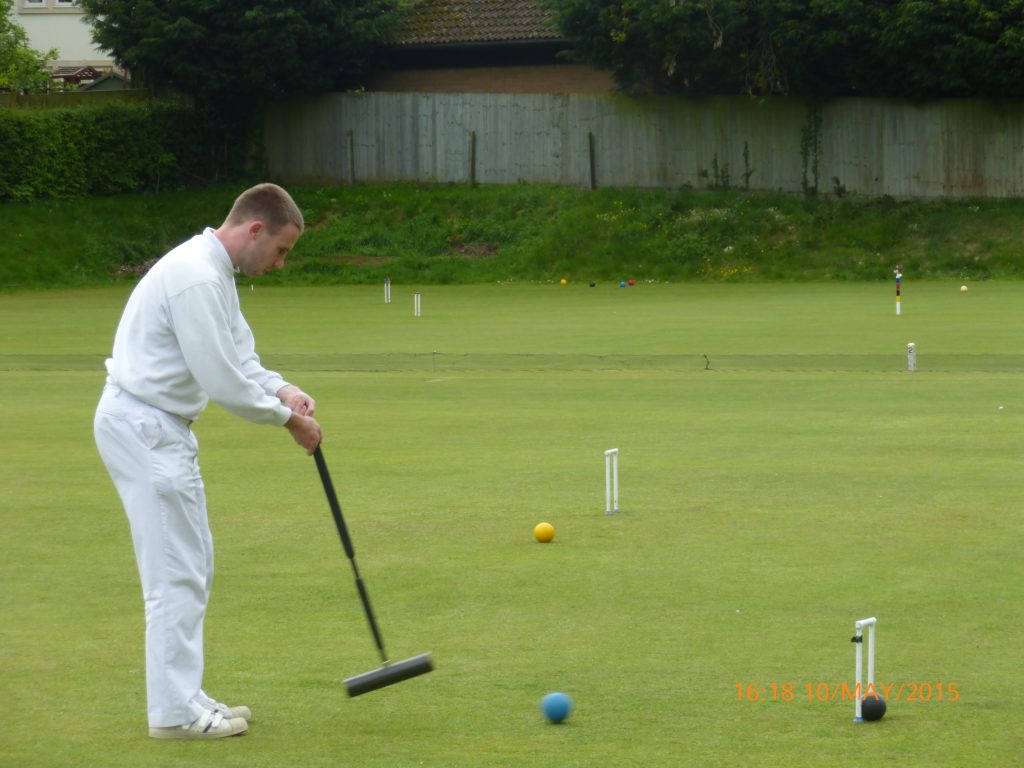 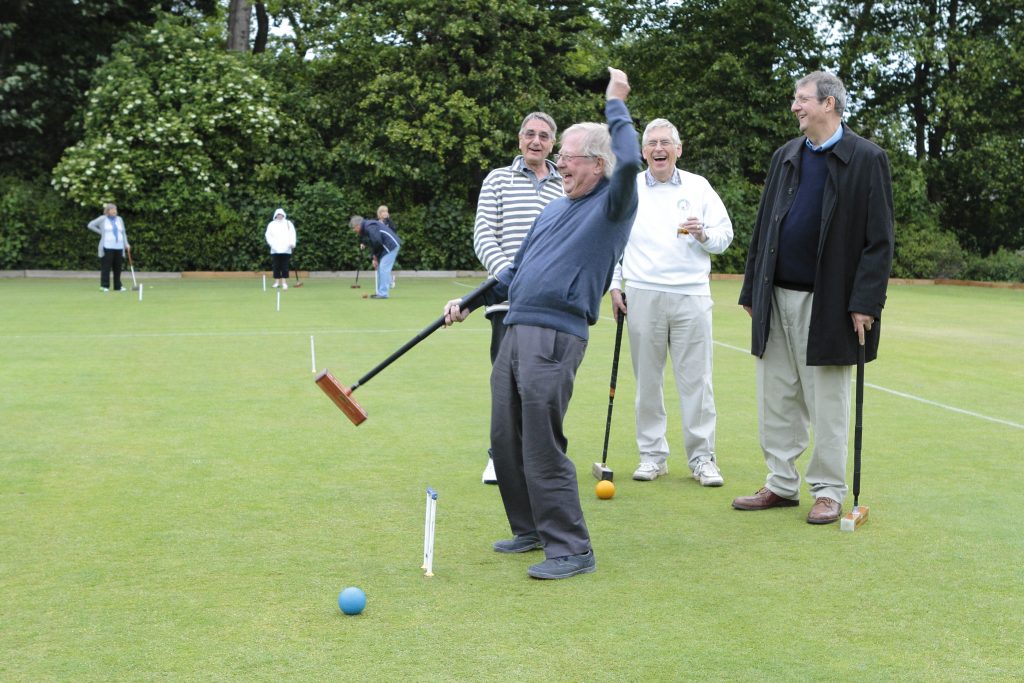 Tim Brooke-Taylor having fun at a charity event at Nailsea. 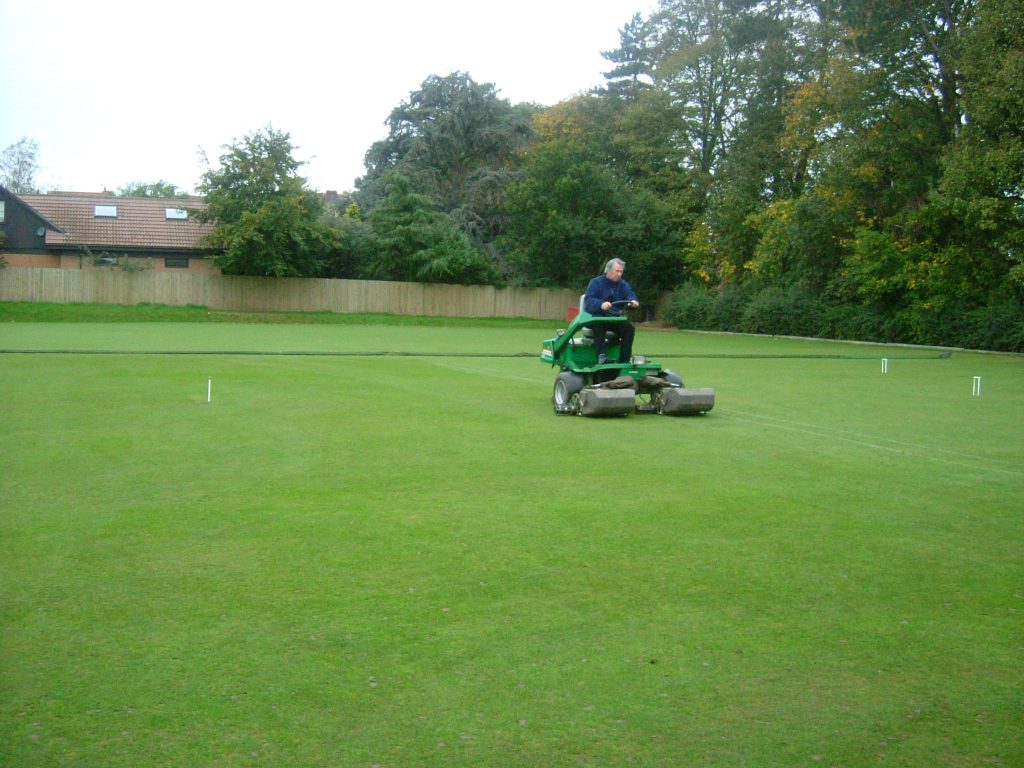 John cuts the grass. At Nailsea, the Club members do all the lawn preparation. This helps to engender a great Club atmosphere and a feeling of camaraderie 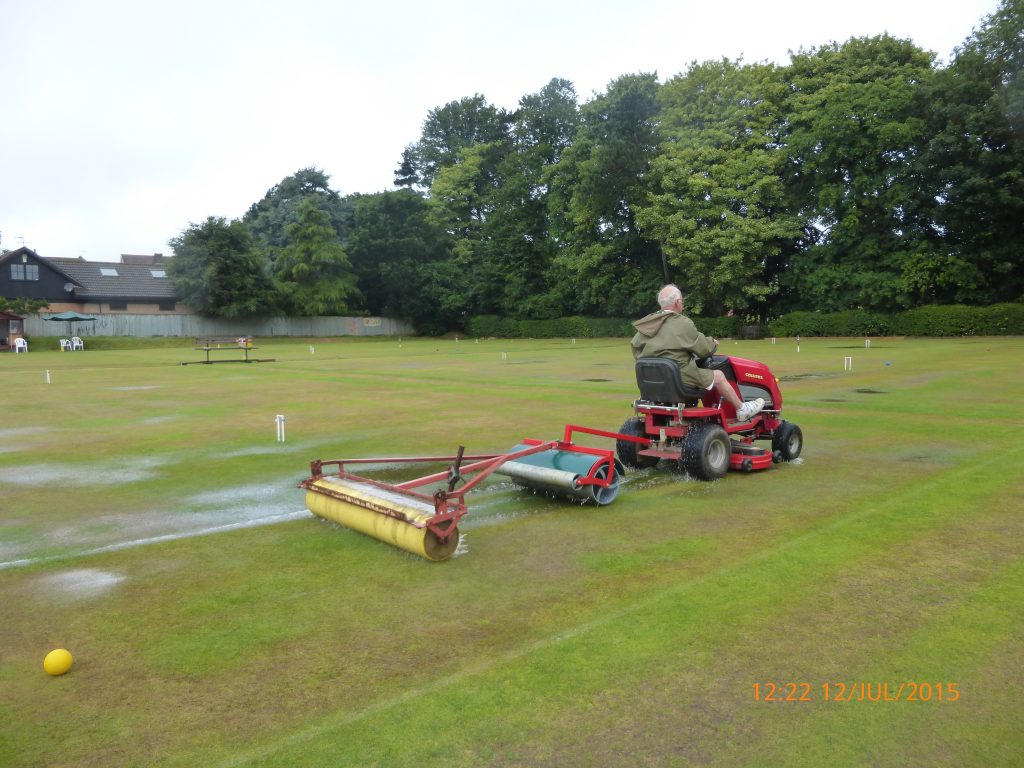 Geoff saved the day when the lawns flooded during a tournament following a torrential downpour. He  donned his work clothes on top of his “whites”and manned the tractor towing the Sarel spiking roller and the light roller. The water was duly dispersed and the tournament continued. Geoff then won the trophy! The photograph made it into the national Croquet Gazette – whose editor just happened to be playing in the tournament. Nailsea led the way again!