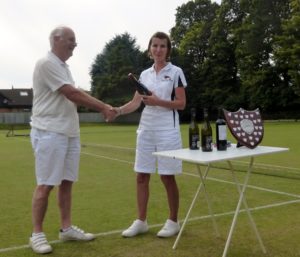 The Nailsea B Class Advanced tournament had 10 entries, down from its usual number, like so many other AC tournaments this year. The conditions were perfect for croquet with firm hoops and a good lawn speed. Although most of the players were fairly local, we were delighted to welcome Lorna Dewar and Rosemary Saunders-Robertson who had travelled from Edinburgh to take part. Their high level GC background, was immediately evident as they played very positively and quickly and with delightful fluid action. They ran tricky angled hoops from distance and rarely missed roquets.
The tournament was run as a Swiss using Andy Dibbens’ wonderful Swiss management spreadsheet program. We only used its most basic features as this was strictly 5 separate rounds. However, the fact that it produced pairings for the next round with a simple entry of results and the press of a button was fantastic for the manager. The rankings for each round were based on the results so far. After the first round, the only differentiator, after number of wins, was net points. Subsequent rankings were based on numbers of wins , then numbers of wins against players with maximum wins (n), then wins against players with (n-1) wins etc. Pairings for the next round were then produced according to the usual Swiss algorithm. It was all very transparent and logical – infinitely better than the scribblings and mutterings often associated with pencil and paper methods.
After 4 rounds, Geoff Hughes from Nailsea was in the lead, having won all his games. Lorna and Eric Soakell (Bristol CC) had each won 3 games so there was all to play for in the final round. David Hunt (Nailsea) then beat Geoff but Lorna beat Eric. As Geoff had beaten Lorna in an earlier round, the program declared Geoff Hughes the winner by the closest of margins – he had won their game +1T, So, Geoff took home the Margaret Fleming Shield, a bottle of wine, and also a prize for the fastest win. It was a popular win as Geoff is also an attractive player to watch with his positive attacking play. Lorna was runner up and received a bottle of wine. David Hunt won the prize for the biggest upset. As an 8 he had beaten a 2. Robert Upton (Dyffryn) also received a prize for a speedy finish.
The manager thanked all the Nailsea members who had contributed to the success of the tournament. The lawns team and the hospitality team had provided the customary Nailsea levels of excellence in all areas. Lorna thanked everyone for making herself and Rosemary so welcome and promised that they would return to Nailsea. The photograph shows Geoff Hughes, Club President and tournament winner, presenting Lorna Dewar with the prize for being runner-up.