Nailsea and District Croquet Club hosted one of its annual tournaments for the Michael Poole Cup, a competition for advanced rules Association Croquet for players with handicaps in the range 5 to 12 on 8th And 9th June. Of the 10 entries 5 came from the home club, the others from Bristol, Bath, Blewbery and Nottingham. Rain fell steadily throughout Friday morning, but a window in the weather gave the hard working club members to prepare the lawns for a 9.30 start on the Saturday when the weather was thankfully dry but cool and very windy.

The manager had decided to use the Swiss format, not because he thought it was particularly appropriate but because he could not think of anything better for 10 players over 2 days! The first 3 rounds (of 3 hour matches) were played on Saturday at the end of which Bob Whiffen of Bristol was leading with 3 wins, with Libby Howard-Blood, Kathy Wallace, Brian McCausland and David Hunt (all of Nailsea) chasing on 2 wins. The hoops were (as usual) firm but set on the generous side of 1/16”, but even so only 3 games were won with a peg out, 2 by Kathy Wallace and 1 by David Hunt.

Play restarted on Sunday in pleasant conditions and Bob continued his winning ways in the morning but in the chasing group only Kathy won. The last round started at 1.30 and an hour later the rain set in and continued until the close of play. Bob and Kathy both won their games, so the trophy went to an undefeated Bob with Kathy as runner up. Kathy also won a token prize for the fastest win as did Mike Salisbury of Bristol for the best win against a lower handicap rated player.

Despite the unseasonal weather everyone was in good spirits to the end and enjoyed each others’ company, Nailsea’s recently levelled lawns and the excellent catering. 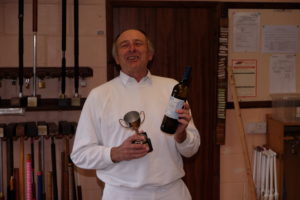 Bob Whiffen, delighted with his win.